Dog meat 狗肉 gǒu ròu has been eaten in some parts of China since 500 BC, and possibly even earlier. Some researchers suggest that wolves in southern China were domesticated for meat. The ancient Chinese philosopher Mencius 孟子 mèngzǐ (372 BC – 289 BC) spoke of dog meat as a completely edible and dietary product. Dog meat in Chinese is sometimes rather vaguely called “aromatic meat” 香肉 xiāng ròu or “mutton of the ground” 地 羊 dì yáng, in Cantonese they use the phrase “aromatic meat three to six” (三 六 香肉 sānliù xiāng ròu; Cantonese Yale transcription : sàam luhk hèung yuhk – 3 + 6 = 9, the words “nine” and “dog” have the same sound gáu). In Mandarin (the state language of the PRC), “nine” and “dog” sound differently.

Dogs have been eaten in China for several millennia. Their meat is believed to have medicinal properties, and is especially popular in northern China in winter, as it supposedly promotes heat production in the body. Historical data indicate that in difficult times of food shortages (war, crop failure), dogs served as an additional source of nutrition. 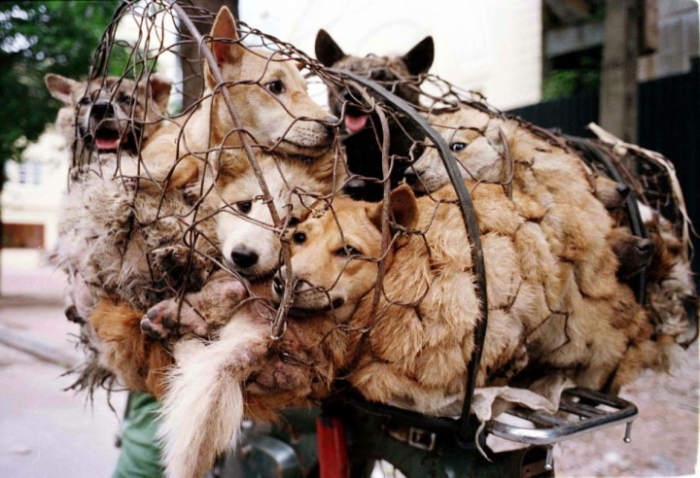 Consumption of dog meat varies by region, with the most common in Guangdong, Yunnan and Guangxi provinces, as well as in the northern provinces of Heilongjiang, Jilin and Liaoning. In southern China, it is easy enough to find a restaurant serving meat from specially bred dogs. Nevertheless, there are cases of finding dishes from abducted animals on the menu.

The movement against the consumption of dog and cat meat gave additional impetus to the formation of the China Animal Welfare Organization (CCAPN). In January 2006, the organization raised the issue and launched protests against eating dogs and cats, starting in Guangzhou and continuing in more than a dozen other cities “with the best public response.” Ahead of the 2008 Olympic Games in Beijing, Chinese officials demanded that dog meat be removed from the menus of 112 official Olympic restaurants so as not to offend foreign visitors who might be shocked by the presence of dog food.

In early 2010, a bill was proposed in China aimed at preventing the consumption of dog meat. However, the legislative ban is not expected to be effective even if it is passed. On January 26, 2010, as part of measures to protect animals from cruelty, a prison term of up to 15 days was established for the consumption of dog meat. However, the food festivals paid no attention to this and continued the open sale. For example, the 4th annual food fair in Yulin (Guangxi province), which opened on May 29, 2011, “ate” 15 thousand dogs in 10 days.

While remnants of the dog-eating tradition exist in certain circles of Chinese society, its acceptability has come to be challenged by many social groups, including pet owners. The controversy over the cruelty of dogs preparing for food is raging, accusations of inhumanity surface: sometimes the skin is ripped off when the animal is still alive. In 2012, protests rose with renewed vigor amid media reports of the interception of trucks transporting dogs to slaughterhouses in Chongqing and Kunming. 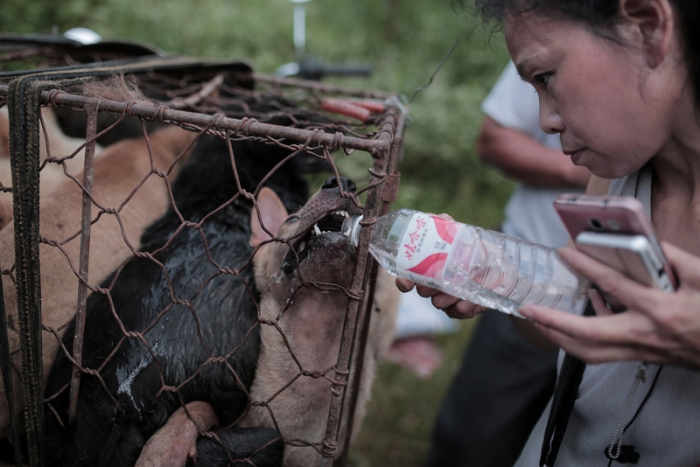 According to Apple Daily reports on June 21, 2013, locals held a dog meat festival in Yulin, Guangxi Province – more than 100,000 dogs were planned to be killed that day. According to further reports, on June 22, 2013, some demonstrators were charged with attacking local residents. The caring citizens of the PRC contributed their money to save dogs, including pregnant women and with newborn puppies. Sick animals were also found.

In Hong Kong, the Dogs and Cats Ordinance was introduced to the government on January 6, 1950. On pain of a fine and imprisonment, he forbade the killing of any dog ​​or cat for food, whether for humanitarian or other purposes. Four local men were sentenced to 30 days in prison in December 2006 (Year of the Dog) for killing two dogs. Earlier, in February 1998, a Hong Kong resident was sentenced to one month in prison and a fine of HK $ 2,000 for hunting street dogs for food. 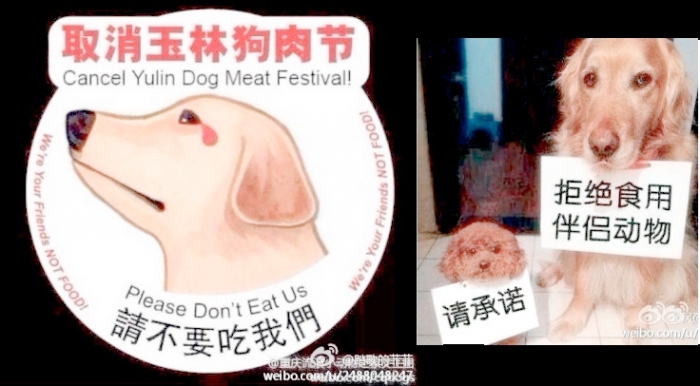 Sticker for the cancellation of the Yulin Dog Meat Festival

In 2001, the government of Taiwan, due to pressure from local animal protection groups (although there were some protests), and to improve the international image, introduced a ban on the sale of dog meat. In 2007, another law was passed, significantly increasing the penalties for the trade in dog meat. However, animal rights activists accuse the Taiwan government of conniving at those who continue to kill animals and sell dog meat in restaurants. Although the slaughter and consumption of dogs is illegal in Taiwan, it does take place because dog meat is believed to have health benefits, including the effects of improving blood circulation and raising body temperature. In 2007, lawmakers allowed fines for dog meat sellers approximately $ 7,730.

How not to try dog ​​meat in China

Most travelers in the Middle Kingdom are concerned not to accidentally try dog ​​meat. Rest assured, dog meat is a rarity on Beijing’s restaurant menus; it is rather unlikely that you will be served it. Most restaurateurs are well aware that not everyone eats dog meat, this is especially unlikely among Western people, and they will not sell you dog meat if they are not completely sure of your intentions.